Matèria is pleased to present Grass is greener: an international exhibition project that brings together two artists working through two fundamental forms of visual art: Giulia Marchi with photography and Magnus Frederik Clausen with painting.

The project is structured in two parallel exhibitions, the first taking place at Matèria until 26 January, 2019 and the second opening at Annual Reportt in Copenhagen in January 2019. Grass is greener arises from the interest of curator Paola Paleari to explore how a long-lasting yet always current relationship, such as that between photography and painting, can manifest itself in operative terms through the practices of a photographer and a painter put in contact for the occasion.

The first phase of the project consisted in an exchange of visual materials, texts, citations and references that took place online and which allowed the two artists, who had never collaborated before, to find a common line of work. From this dialogue, which unfolded over a year and a half, the centrality of the “presentation vs. representation” binomial emerged as the two poles of the sphere of action in which the visual artist moves in his/her translation of reality. In other words, by assuming the external world as the “level zero” in image creation, the visual artist can fundamentally operate in two ways: by interpreting it linguistically or by presenting it as it is.

Starting from these reflections, Marchi and Clausen have worked on a series of new artworks that see the image as a space where the modalities of presentation and representation often coexist and overlap. The differences and specificities – often of a formal nature – on which a large part of the comparison between photography and painting is established are thus circumvented in favor of a structural community based on the medial nature of both artistic forms. Also the boundaries between genres are dissolved, to the point that the same image can simultaneously be read as a self-portrait, a still life or a landscape.

The two exhibition spaces play a fundamental role in the project. The exhibition at Matèria presents the final result of Grass is greener in the form of unpublished works realized for the occasion and previously produced works reviewed in light of the whole process. The exhibition at Annual Reportt will instead consist of a reinterpretation of the experience that led to the creation of the exhibition at Matèria, from which it will use some elements in order to expand the dialogue between photography and painting by introducing the dynamics of reproduction. 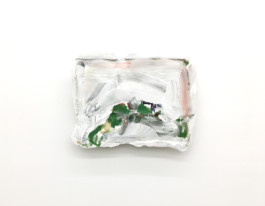