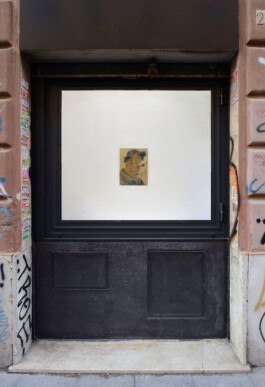 SideShow - a parallel initiative to the exhibition program at the gallery, conceived for Matèria’s new external vitrine - places a spotlight on works produced by national / international artists, especially those who have never been exhibited in Rome.

Joachim Lenz is a painter who enjoys the act of painting itself through the material and physical experience of making. In his process the image is never born out of a complete and defined idea but from an approach through which he cancels and repaints the entire pictorial surface in several sessions, defining a method that becomes the very essence of the work.

His subjects are mostly inspired by what is present around him, usually in his studio: banana peels, cigarette butts, etc. This type of subjects are fundamental for Lenz as they constitute two important areas within his practice; on the one hand the concreteness of the material, on the other the flexibility of organic forms. Through these passages, Lenz enacts transitions from nature to man, relations between inside and outside, subsequently arriving at the construction of anthropomorphic figures.

His subjects give us the sense of being inert and introverted, yet they possess an expressive character within. This is why Lenz doesn’t add eyes and a mouth to their features. In this sense, what seems to be automatically activated is a process of contemplation in which the image suggests an inner life, stimulating reflections on representation, on the question of subjectivity, on the temporal dimension and, lastly, on the psychological conditions within the work of art.

Joachim Lenz’s paintings are pervaded by suspended and indefinable atmospheres, that allude to a self- destructive condition, halfway between paradox, humor and catastrophe. The characters portrayed in his paintings show themselves to the viewer (yet ignoring him, turning their gaze elsewhere), caught in the simple act of smoking a cigarette: a minimal action, banal in its everyday life that, however, becomes significant in the very moment it is depicted.

The act of enjoyment so dear to Lenz is manifested in his work precisely through the element of smoke that is passively consumed. Similarly, the act of smoking could be replaced by that of masturbation: both moments of pleasure that arise from the need to isolate oneself. The guy who wears a hat and a green shirt is somewhat of a Pinocchio who has become an adult and aware of the invariable conditions of the world. A somewhat arrogant boy, indifferent to the world and to others, who seems to utter the fateful phrase “I’m going to buy cigarettes”, and then might never come back.

Joachim Lenz (1981, Germany) studied painting at the Akademie der Bildenden Künste, Munich with Sean Scully and Günther Förg where he graduated in 2009. In 2004 and 2005 he studied at the Facultad de Bellas Artes of the Universidad Complutense, Madrid.

He also holds a degree as Master of Education in Arts and Spanish Language from the Universität der Künste and Humboldt-Universität, Berlin. He has taken part in a number of group shows, has had solo shows at exhibition venues in several German cities, and also curated group shows himself. His work is represented in international collections. Most recently, his works were shown by Obscura Gallery at The Preview Art Fair in Seoul (April 2022). Joachim Lenz lives and works in Berlin. 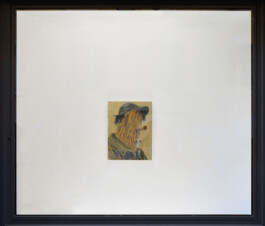 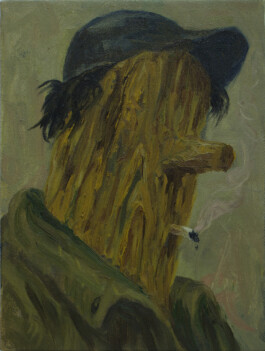