Matèria is pleased to present Mario Cresci’s first solo show at the gallery titled Combinazioni Provvisorie. The exhibition is accompanied by a critical essay by Mauro Zanchi and presents two key works by the artist: Analogie e Memoria (1980) and Cronistorie (1970).

In Analogie e Memoria - a body of work produced in Matera between the late seventies and eighties - Mario Cresci merges signs, images, text, drawings, notes, fragments of icons kept in archives and drawers; projects, collages, posters, extracts of printed texts and images, borrowed photographs. A diary of an iconic journey, in which all the elements are composed of each other, much like a dummy for a large book. The photocopies - 56 of which are housed in the first room of the gallery - become “works” in the sense of art as an idea, to be understood as propositions that fulfils a cognitive task. Cresci makes use of the most anonymous of our communication means: in this case replacing the use of the camera with a photocopier, where he lays out his whole world; one defined by visible reality and cognitive explorations, in an attempt to avoid the formalistic implications tied to the canons of classical photography.

In Cronistorie - a forty five minute 16mm film, reassembled in a 10’ video piece - Mario Cresci constructs a story and undergoes an investigation on popular culture in the southern Italian region of Basilicata. Cresci’s depiction is both realistic and visionary, moving between tradition and avant-garde, between work of art and mysterious projection. Images move in densely anthropological scenarios, within the mystery of peasant rituals, animal sacrifices, religious processions, within the shaded areas of the collective rural unconscious. The narrative draws on an inexhaustible source of the world’s latent images, shining a light on signs, paths, footprints and oneiric maps in dialogue on a formal and perceptive level.

Cronistorie is set in the seventies - within a context of blending experiences, contamination of ideas and vision, distant and often anarchic viewpoints - and can be viewed as an attempt to understand the reasons for my detachment from the norms of seeing and feeling that animated the reality of those years. Art was my only way to survive and to keep away from all that I viewed and felt as inhumane, wrong and false. The video in its essence is also this: a concentration of uneasiness that finds in a particular place like Tricarico a similarity to what I later observed in Macondo from ‘One Hundred Years of Solitude’. (Mario Cresci) 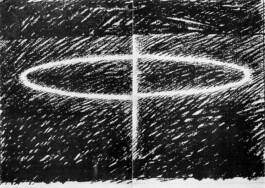 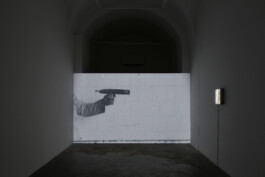