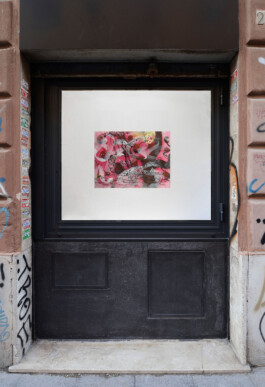 Matèria is pleased to inaugurate its street facing gallery vitrine with the second instalment of SideShow - curated by Ornella Paglialonga - featuring Chinese painter Runo B.

SideShow - a parallel initiative to the exhibition program at the gallery, conceived for Matèria’s new external vitrine - places a spotlight on works produced by national / international artists, especially those who have never been exhibited in Rome.

Runo B’s imagery emanates senses and intuitions: it seems to draw you into its vortex, crunching like a trodden leaf, clinking like a shopping trolley full of products. Play a game wraps the observer in its licking brushstrokes, smeared with chocolate, fiordilatte and sour cherry flavoured ice cream from cheap brands of the city’s worst discount stores. Runo B places the viewer inside an allegorical world, remaining on the plane of literal interpretation with a somewhat naïve comedy moved by his bold pictorial interventions.

If at first Play a game maintains an extremely pop and virtuoso reading, at a second, we realise the existence of a particular attention, dear to the artist, towards fools. What does he mean? In particular, those who lead rather habitual lives, characters without serious problems, not really mad, but possible vagabonds, people who decide not to wear a mask, insomniacs, etc.

In Runo B’s practice, the most intriguing result is his way of creating sub-layers of meaning: the character depicted clumsily tries to sabotage a system demanded by the global world, but on yet another level, the poor, frustrated person seems to be in it with all his shoes. The fool in Runo B’s work is not an actual fool, but a person who sincerely tries not to belong. We can easily liken him to a Fantozzi-like figure, the underdog/outcast protagonist of an iconic Italian comedy from the 70s, fatigued by a system that demands too much of him compared to what it can offer him, and every now and then he rebels.

This is how Runo B shows us figurines eager to escape from those who want to tie them up, ridicule them and punish them for doing something wrong. It is no coincidence that the artist, for this depiction, extrapolated some images from a video found on the web, where members of a small village in China physically punish a man for going to buy cigarettes without a mask.

In the fleeting composition of Play a game, it is good to consider the use of technique. Mixing acrylic, oil and collage, Runo B keeps on different fronts and effects to make the canvas vibrate, never leaving anything to chance but, on the contrary, using all the details, even the most trivial, for the understanding of the pictorial choices and the meanings. Having said this, we can note how the collage emphasises, in this case, the ‘poor’ aspect of the narrative content, enriching it, on the visual level. Moreover, the composition stems from a view that Runo B has carefully studied and observed in Goya’s painting, as in the scenes in The Disasters of War (c. 1810) of the Spanish persecution by Napoleonic forces during the Spanish War of Independence, where the connection to the ‘crucifixion’ is visually translates into ‘tied to a tree’.

In the course of his career, Runo B has laid the foundations for a unique body of work, mixed with an in- depth discussion of the history of painting, society and politics, while always maintaining his own highly original vision. 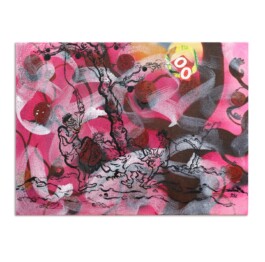