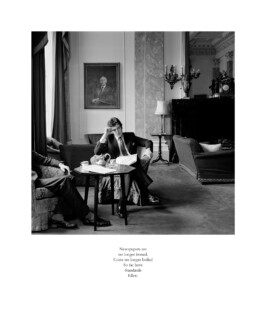 Karen Knorr was born in Frankfurt am Main, Germany and was raised in San Juan, Puerto Rico in the 1960s. She finished her education in Paris and London. Karen has taught, exhibited and lectured internationally, including at Tate Britain, Tate Modern, The University of Westminster, Goldsmiths, Harvard and The Art Institute of Chicago. She studied at the University of Westminster in the mid-1970s, exhibiting photography that addressed debates in cultural studies and film theory concerning the ‘politics of representation’ practices which emerged during the late 1970s and early 1980s. She is currently Professor of Photography at the University for the Creative Arts in Farnham, Surrey.

Karen Knorr produced Belgravia (1979-1981) a series of black and white photographs with ironic and humorous texts that highlighted aspirations, lifestyle and the British class system under the neo liberalist Thatcher era in the late 70’s and early 80’s. Her most well known work called Gentlemen (1981-1983) was photographed in Saint James’s clubs in London and investigated the patriarchal conservative values of Britain during the Falklands war. Karen ’s work developed a critical and playful dialogue with documentary photography using different visual and textual strategies to explore her chosen subject matter that ranges from the family and lifestyle to the animal and its representation in the museum context.In 1986 her work Connoisseurs used colour to explore connoisseurship regarding authenticity, heritage and art in England. Here she introduced elements and staged events in the architectural interiors of Chiswick House, Osterley Park House and the Dulwich Picture Gallery. The use of text and captioning appeared as a device to slow down consumption of the image and to comment on the received ideas of fine art in museum culture. These strategies still appear in her photography today with digital collage of animals, objects and social actors in museums and architecture challenging the authority and power of heritage sites in Europe and more recently in India.

Academies (1994- 2001), a series of colour photographs taken in academies and museums across Europe, reflects on the relationship between the production of western fine art, its transmission and consumption. The work continues a critical dialogue with conceptual art, visual culture, feminism and animal studies reflecting an engaged interest in theory and its relation to photographic practice. In 1995 the Academies project included video and installation with wall text transfers in order the explore the relationship between art and science in the staging of transgressive performative events and gestures in museums.

Being for Another (1995), an 18 minute video records a young man caressing an 18th century sculpture by Canova in the Victoria and Albert Museum and three lifeclass models enact the lifeclass on the dissecting table of the anatomy theatre of Uppsala University in Lessons (2002). The introduction of a sound glass sculpture with recorded birdsong responded to the furniture and art collection of The Wallace Collection in 2001 synthesizing a 1960’s Pete Seeger song with an actual blackbird’s sound.

In her series Fables (2004-2008) photographs mixes analogue and digital photography playfully reconfiguring tales (Ovid, Aesop La Fontaine) with popular culture (Disney and Attenborough) in museums and heritage sites which include Carnavalet Museum, the Museum of Hunt and Nature in Paris, Chambord Castle and the Conde Museum in Chantilly Castle. The visuality of these photographs is rich with reference to the baroque. In the last section of the work, Knorr interrogated the free flowing space of modern architecture in Corbusier’s Villa Savoye reintroducing life into the modernist aesthetic of a building.

Since her life changing journey to Rajasthan, India in 2008, Karen Knorr’s work continues to explore Rajput and Mughal cultural heritage and its relationship to questions of feminine subjectivity and animality. India Song, a series of carefully crafted photographs explores the past and its relation to India’s contemporary heritage sites across Rajasthan.

Since 2012 Knorr has been visiting Japan to reflect on tradition within contemporary Japan referencing Ukiyo-e prints and folktales connected to Shinto and Buddhist heritage sites. Her first series entitled Monagatari, places animals and humans in temple sites found in Nara, Kyoto, Tokyo and Ohara. Her second related series Karyukai is inspired by the Kano’s 36 portraits of poets also referencing “bijinga” prints  of the 17th century. Women photographed by Karen Knorr were asked to compose waka and haiku reflecting on their life and dreams.